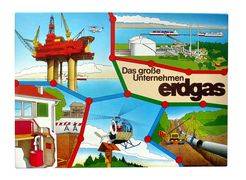 This is the first published game to use a victory point track going around the board (known among German gamers as a Kramerleiste). This game is a precursor to Wolfgang Kramer's Wildlife Adventure and Expedition games, utilizing similar mechanisms but with a gas pipeline-building theme. It was produced as part of an advertising campaign (presumably for an oil company?).