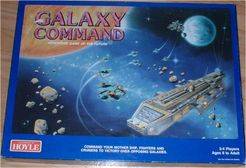 In Galaxy Command, two to four fleets meet in a decisive battle. The key to victory is to find which enemy ship holds the enemy commander. Each player's fleet consists of a Mother Ship (with turrets), four Cruisers and six Fighters. There's also your Prison Outpost, which is sort of your home base (it doesn't move or shoot). Underneath a secretly chosen ship, you place the peg representing your commander. If he's captured, you lose. On your turn, you get four dice rolls, which can be used to move (orthogonally) or shoot to capture. You must announce each attempt *before* rolling the dice. Each piece can normally move and/or shoot only once (except Cruisers, who can shoot again if they miss). The board is divided into two colors of zones, and this affects shooting and movement. Captured pieces can be freed if you reach the holding Prison Outpost. Having one's Mother Ship captured is real bad because it does not go to the Prison Outpost --it is removed altogether! Every time you capture (including ships in one of a Mother Ship's launching bays), you get a bonus roll; basically, the shot that just occurred doesn't count against your four rolls. The bonus roll must be taken by the same piece.