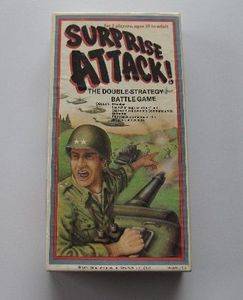 From the rulebook: In Surprise Attack!, each player is the commander of a military force—one has his army encamped in the middle of the battlefield at the time when the other hurls his forces into action from the surrounding forest, launching the surprise attack. The defender suffers early losses, then regroups and attempts to move two of his valuable Command Units to the safety of the forest. The attacker tries to capture two of the defender's three Command Units before they make good their escape.