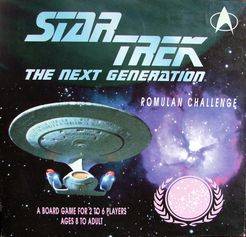 From the rules: Twelve planets in federation space, near to the Romulan Neutral Zone, have been occupied by the Romulan Empire. The planets are strategically very important as they have some of the most valuable mineral deposits in the galaxy. The Romulans have surreptitiously taken control of the planets making accusations of espionage against the Federation. The leaders of the planets are being interrogated and the mining personnel treated as slave labor. The Romulans are forcing the use of dangerous intensive mining techniques which allow very rapid extraction of the minerals, but could soon make the mines unworkable. The remaining mineral deposits would be almost impossible to extract. The Romulans must be stopped. The minerals taken and the damage caused will enable their empire to become even more powerful. One by one the planets must be liberated. It is essential for the Federation to regain control in order to maintain peace throughout the galaxies.