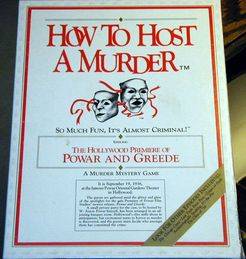 You and the other guests are gathered -- in the glare of the spotlights at Powars Oriental Gardens Theater for the premiere of Powar Film Studios' newest release, "Powar and Greede." A small, private party for the cast is being held in the Banquet Room adjoining the theatre, while outside, Hollywood's elite mills about, breathlessly anticipating the 8:30 curtain. Earlier today, W. Anton Powar appeared in the private garden of the theatre where, as a publicity stunt for the new film, the impression of his bare feet was made in concrete beside that of his former stare, Tatyana Eltale. After retiring to his private apartment at the conclusion of the ceremony, Powar was expected to join you and his other special guests for cocktails before the movie starts, but he's running curiously late... Characters: Denise Ann Dayer Hack Ryder Hi Voltaje Ivonde B. Alone Savoy R. Fayre Sel U. Lloyd Tatyana Eltale Stu Dyron.