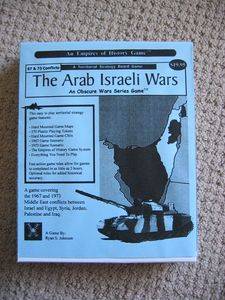 The Arab Israeli Wars is an 3rd party expansion for Axis &amp; Allies and is a territorial strategy board game covering the 1967 and 1973 wars between Israel and its Arab neighbors. It is an Empires of History game, which utilizes a D10 variant of the Axis &amp; Allies gaming system. The Arab Israeli Wars includes 2 game scenarios; one for the 1967 War and one for the 1973 War. In the 1967 war, Israel must strike out quickly to wrestle the Sinai region away from Egypt and deal deadly blows against Syria and Jordan before the weight of the superior Arab numbers can fully be mobilized, and before Iraq joins in the war against them. Israel's ready reserves gives them an edge in calling up their armies and they have to leverage that for everything it is worth. In the 1973 war, Israel begins play in control of the Sinai, Palestine, and the Golan Heights. The Arab powers must hit Israel hard and fast, trying to overrun Israel's border armies before Israel can mobilize its then-superior military might. The Arab Israeli Wars is a fast paced game (some games can be concluded in as little as a hour) historically portraying these two middle east conflicts. Optional rules for land mines and the use of the nuclear weapons adds additional game play variety. Contents: 17" x 22" four piece Cardstock Game Map (four 8.5"x11" sheets) 270 Plastic Playing Tokens. 270 Plastic Playing Tokens Stickers. Game Rule Booklet. 1D10 Cardstock cut out Mines, Nukes, and National Markers Expansion For: Axis &amp; Allies