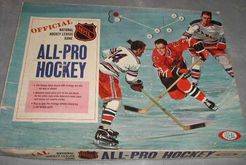 Touted as the Official National Hockey League Game and played with strategy and skill, not luck or chance. The offensive coach plans and carries out moves for his entire team while the defensive coach plans and carries out defensive moves. Play by play the strategy unfolds simulation a real hockey match. An interesting game of move an counter move to get into that scoring position. Penalties simply occur from forgetting to uncheck a body checked player. .