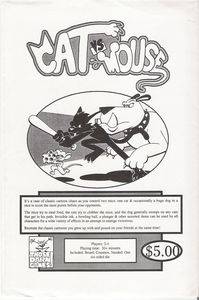 Cat vs. Mouse lets players "Recreate the classic cartoons you grew up with and pound on your friends at the same time!". The game is for 2-4 players and each player gets a "team" of 1 cat and 2 mice. The main object of the game is to get 10 points, mostly by having your mice get food from the refrigerator back into the mouse-hole. The board is the layout of a house with the mouse-hole on one end and the refrigerator on the other end. Your mice try to get food and your cat tries to stop the other team's mice from doing so. There is a dog counter which can be moved each turn, and you use it to try to go after the opponent's cat. In terms of fighting, you can only fight an enemy (The mouse's enemy is the cat, the dog's enemy is the cat, and the cat's enemies are the mice and the dog). You can also pick up items throughout the house that you can use during combat to modify your strength. If you defeat one of your enemies in combat, it is considered "Clobbered" and cannot function until the next turn. Most items give a strength modifier but some items have special effects. In the basic game, you get 4 points for having your mice get a piece of food back to the mouse-hole, and 1 point when your cat clobbers an opponent's mouse. Optional rules include rules for variable points for the different types of food (cheese, drumstick, apple)