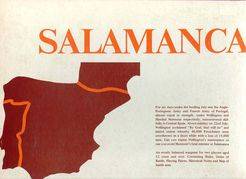 The battle of Salamanca is a Napoleonic operational game that simulates the historical confrontation between a French Army (known as the Army of Portugal) commanded by Marshal Marmont and an Allied Army, commanded by Viscount Wellington of Talavera, and composed of British, Portuguese and Spanish Troops. The Battleground lay a few miles south east of the ancient city of Salamanca, The battle was fought on the 22nd of July, 1812.