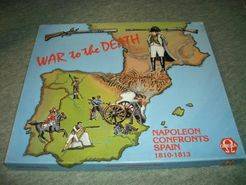 War to the Death is a simulation of the French attempt to subjugate the Iberian Peninsula in the period 1810-1813.The game highlights the special problems that the imperial armies encountered in their conflict with the Anglo Portuguese Army, the Spanish Regular Army forces and the Spanish Patriot guerrillas. The game also accentuates the particular supply and replacement difficulties that plagued French forces operating for an extended period of time in a hostile country defending its freedom. Finally,the game focuses on the special command and control problems which Napoleon encountered trying to wage a remote control war in the Iberian Peninsula from París, Moscow and Germany against the Spanish people and the combined forces of Spanish Army and Guerrilas and the Anglo Portuguese (Peninsular) Army under the command of the Duke of Wellington.