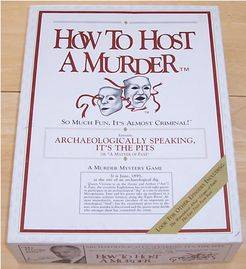 想玩 拥有
How to Host a Murder: A Matter of Faxe

A MATTER OF FAXE ARCHAEOLOGICALLY SPEAKING, IT'S THE PITS Arthur E. Faxe, the eccentric entrepreneur and amateur archaeologist, sails this month for ancient Mesopotamia in search of human fossils and in the hope of proving the Darwinian Theory of Evolution. Faxe has chosen a region of the Tigris-Euphrates Valley known since ancient times as Vages for the site of his expedition. This area is distinguished by an immense and prominent boulder that can be seen for miles and is known locally as the Rock of Vages. A small cleft, or opening, at the base of the rock is the site of an unusual collection of fossils. The cleft, discovered in 1854 by French archaeologist, Henri Formie, is described in scientific literature as Rock of Vages, Cleft Formie. By arrangement with the local government, Faxe and his entourage will establish an extensive camp in an abandoned military fort near the archaeological site and overlooking the Tigris River. Faxe advises, "We are endeavoring to locate evidence in fossil form of the existence of an ancient human or near-human ancestor. I have spared no expense to see that my staff and guests are provided with the most modern of equipment necessary for their research and the essentials necessary for their comfort." Purveyors of goods to the expedition advise that no less than fifty cases of fine wines and champagnes will accompany Faxe along with appropriate linen, silver and china, tables, chairs, canopies and tents, as well as a quantity of armaments for hunting and defense against bands of brigands which are known to roam the area. A domestic staff of thirty will be on hand, as well as an archaeological research team of seven. The expedition, by arrangement with the Turkish government, will occupy an old fortress situated near the site of the dig. The fort, unused by the present government but once a key military post, is called Fort Ap Aachih. CHARACTERS Terra Sunder, Major General E. B. Sawtedd, Lester A. Fayre, Lady Melissa N. Lynke, Anne T. Ickwitee, Hamilton MacTorr, Ashley R. Sonnyste, Conrad Iver