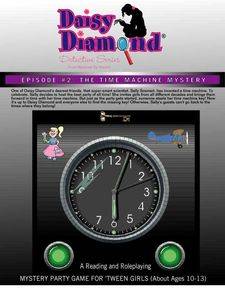 How to Host a Murder styled party game. No audio comes with these games, just clue booklets and party planner. Designed for girls Ages 10-13 The DAISY DIAMOND DETECTIVE SERIES For "tween" girls . . . Episode #2: The Time Machine Mystery One of Daisy Diamond's dearest friends, a scientist named Sally Sosmart, has invented a time machine. To celebrate, Sally plans to host a very special party. Yes, this will be a party like none other! To make things interesting, Sally plans to use her time machine to bring some of her guests forward in time. That's right! She will travel back to the 1920s to pick up Fiona Flapper, and to the 1950s, where she'll pick up Suzie Sockhop. And more! Daisy Diamond will also be attending the party. Daisy is very concerned that someone might try to steal Sally's time machine. After all, an invention like that could change the world! And Daisy knows that plenty of people would want to use that time machine for their own dishonest means . . . Besides, you know what they say about the girl gumshoe: Wherever Daisy Diamond goes . . . A Mystery is sure to follow . . . Here's the Character List: Daisy Diamond is the greatest girl detective of all time. She is known for being both brainy and brave. She's cute, confident and capable, and solves crimes everywhere she goes. She usually wears a hat and sometimes a trench coat, or raincoat. She also carries a magnifying glass to help her search for clues. Sally Sosmart is a super-smart scientist who has invented a time machine. She is determined and diligent, and loves to create new things that no one has created before. She spends a lot of time in the laboratory in her home, and hardly notices the time passing by. She always wears her white lab coat and carries her calculator. Tessa Tyedye is a flower child from 1969. She believes in love, beauty and peace. She protests what is wrong in the world and fights for causes that she believes in. Tessa is caring and concerned. She wants to make the world a better place for future generations. She wears tie-dyed clothes and flowers in her hair. Suzie Sockhop is a hairdresser from 1955. She loves to dance to rock and roll music, and especially enjoys listening to Elvis Presley. Suzie is outgoing and enthusiastic. She owns a pink Cadillac and goes to the drive-in theater with her friends every Saturday night. She wears large full skirts and a ponytail. Gloria Glamourgirl is a famous singer from 1943. She is patriotic and pretty, and loves big band music. Her favorite song is Boogie Woogie Bugle Boy. Gloria has traveled around Europe with her USO entertainment group, where she sings for our soldiers fighting in World War II. She wears red lipstick and elegant dresses. Fiona Flapper is a free-spirited flapper from 1925. She is a modern woman of the Roaring 20s and just wants to have fun. She is lively and lovely, and especially enjoys dancing the Charleston. Fiona loves to travel by train and likes to do crossword puzzles. She wears flapper dresses and headbands with feathers. Bessie Barnstormer is from 1919. She is probably the best female pilot in the country. She flies her yellow biplane in air shows. Daring and dazzling, she does loops and spins and many other stunts in her plane. She always wears her flying clothes, including a white scarf and goggles. Caitlin Cowgirl is from the Wild West of 1885. She lives on a cattle ranch in Wyoming. She loves to ride horses and hike in the mountains. She has been to Buffalo Bill's Wild West Show, where she watched the cowboys and Indians act out a stagecoach holdup. Caitlin loves all the animals near her home, including the elk, eagles and buffalo. She always wears her cowgirl clothing.