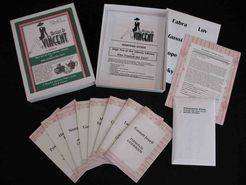 想玩 拥有
Mysteries by Vincent: Women Only – High Tea at the Liberty Library

How to Host a Murder styled party game. No audio comes with these games, just clue booklets and party planner. Designed for a women-only setting. High Tea at the Liberty Library -or- Who Toasted the Tart? Ladies . . . It's May, 1955 and time once again for the monthly meeting of the Liberty Library League. This meeting promises to be one you won't want to miss, with plenty of topics to talk about. First of all, Nona Tumuch, the famous author who recently released that scandalous best-seller, Paytown Placed, has finally decided to step off that high-and-mighty horse she's been riding and join the Liberty Library League. Though one must wonder, what made her finally accept an invitation and be part of a group she has spurned for so long? Of course, there will also be the final dollar count from last week's Library League Bake Sale. Hopefully, with the sales of the goodies from Cooky Kuttre and Meena Ann Moody, the Library League might finally be able to afford that statue of the famous Outlaw Jose Whines, who once called Liberty his home. Oh, and speaking of Meena Ann Moody, she's let everyone know that she'll be making a big announcement at the meeting, one she claims will impact everyone's lives. Hopefully she won't be pulling any dusty skeletons from any musty closets, as no doubt, everyone's got a few secrets they'd rather remained that way . . . SECRET! In any case, as usual, the Liberty Library Leagues meets during High Tea at the Liberty Library . . . Though this may be one High Tea that sinks to a much lower level . . . Also Attending the Liberty Library League Meeting Will Be: Priscilla "Priss" E. Dings is the President of the Liberty Library League, having been elected to the position for seven years in a row. The wife of prominent attorney, Wynn G. Dings, Priss is prim, pretty, and practical - the epitome of the high-society sophisticate. As an excellent example of what an upstanding citizen should be, Priss is active in many charitable causes and is always happy to help those beneath her. Priss dresses in the latest of fifties fashions, and never goes anywhere without a hat and matching gloves. Nona Tumuch is one of the nation's top novelists. Her name has practically become a household word ever since she released her scandalous best-seller, Paytown Placed. Some say the book reflects the seamier side of Liberty, a side that many of the town's prominent citizens would rather keep under wraps. As an author, Nona is intelligent, outspoken, and always investigating the latest story. She wears suits of subtle colors, with a hat and gloves to match. Hope Leslie Devoted is the Fan Club President for that most sensational of all singers, America's #1 heartthrob himself, Bobby Daring. What an honor for any woman! Hope takes her presidential duties seriously, and is instantly offended if someone speaks badly about Bobby. Dreamy, dramatic and determined, Hope spends a lot of time at the library, reading all the latest "Bobby Babble" in the magazines. She wears skirts and sweaters, and usually ties a scarf around her neck. Garnett Jeuell was once elected Debutante of the Year at Liberty's annual Country Club Cotillion, an honor that landed her more marriage proposals than she could count. Now engaged to a handsome local businessman, Har D. Wirkenslob, Garnett spends most of her time planning the perfect wedding and shopping for the most fabulous home furnishings she can find. Sassy, showy, and sharp-witted, Garnett prefers flashy frocks and jeweled accessories. Cooky Kuttre is an acutely happy homemaker, a woman who finds total fulfillment from merely meeting the needs of her man, her husband, Mete Kuttre. Like all really good housewives, Cooky is the queen of the kitchen, and just loves to spend her time concocting the latest culinary creation. She also brags about having a house where "dirt dare not tread, for fear it will instantly be sucked into the vacuum bag." Active, opinionated, and organized, Cooky wears simple dresses and never goes anywhere without her apron. Madame Fabra Cates is a clairvoyant who recently relocated to Liberty, after her spirit guides strongly suggested she move here. Fabra not only tells the future by reading tea leaves, but she also claims to communicate with those who have passed from this life to the next. Temperamental, thoughtful, and theatrical, Fabra prefers to wear wildly colored clothing, with lots of jewelry and a bright headscarf. Gussie D. Uppe has recently returned home to Liberty, after mysteriously being away for six months. A trust-fund tot, her father owns the biggest bank in Liberty, and Gussie grew up with an abundance of riches. She is often considered the best bridge player in town, though she is also quite adept at Canasta and Charades, and many other party games. Tight-lipped, tenacious, and trustworthy, Gussie wears the latest of designer clothes, hats and gloves. Luv Swept is a writer of romance novels and has recently moved to Liberty to research the tragic life and death of her long, lost twin brother, Adonis Studd. Luv hopes to write his story into one of her novels, much like her own numerous ill-fated love affairs have been the inspiration for her books thus far. Sweet, sensitive, and soft-spoken, Luv likes pastel or flowered dresses, with a hat and gloves to match.