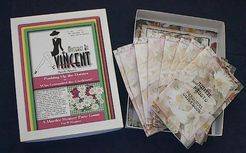 想玩 拥有
Mysteries by Vincent: Women Only – Pushing up the Daisies

How to Host a Murder styled party game. No audio comes with these games, just clue booklets and party planner. Designed for a women-only setting. PUSHING UP THE DAISIES -or- Who Grounded the Gardener? It's September 15, 1942. The Andrews Sisters and Glenn Miller are be-bopping over the wireless, and women's hemlines are just a little bit higher than they were a few years ago. Sugar and gasoline and nearly everything else is being rationed while World War II is raging in Europe and the Pacific. Meanwhile, you're at home in Phunguss Flats, Florida, a town that supports the War effort and our soldiers fighting overseas. Of course, the war hasn't hindered the activities of the Phunguss Flats Garden Club. As a member, you're about to attend the monthly luncheon meeting scheduled for today. As always, it's being held in the clubhouse, just up the walk and past the Sycamore trees from the club's greenhouse. This month's special speaker will be Dr. H. Orty Kulchure, local professor of Botany, who also served as the judge for last month's rose competition. Dr. Kulchure will be speaking on the subject of "Practical Pruning, or Using Those Dead Limbs for Fertilizer." With the motto, "Our Petals are Perpetually Open," you might say the Phunguss Flats Garden Club has a long and lascivious history, one that's fueled a lot of talk around the town. For all who live to talk about it, that is . . . Members of the Phunguss Flats, Florida Garden Club Are: Mumsy Worde is the President of the Phunguss Flats Garden Club. With her husband currently serving in the Armed Forces overseas, Mumsy has found other activities to keep her occupied and to support the War effort. Known to be as cultured as she is charismatic, she dresses in the latest of Paris fashions. Barbara "Barb" Wyre is the Secretary of the Garden Club, and holds office in nearly every guild, league and sorority in town. Both pretty and openly opinionated, she is married to the Mayor, the wealthiest man in Phunguss Flats. Yet despite her privilege, Barb prides herself on having perfected the art of self-sacrifice. She prefers to wear dresses with large flowered-prints and hats to match. Schyla "Schye" Sphinstere is the Garden Club's Treasurer, as well as the town's librarian. Sweet, shy and somewhat secretive, she's an avid reader of romance novels and is still waiting for a prince on a Palomino to whisk her away. And while she's waiting for our military men to return stateside, Schye is active in the War effort, keeping the home fires hot. She wears mostly skirts and sweaters. Auntie Pausto is as famous for her pasta as she is for her petunias. A first generation Italian-American, Auntie Pausto is proud of her heritage. And though she works part-time as a cook at the Phunguss Cafe, her family remains her number one priority. Lovely and lively, she prefers lace to linen, and owns an apron for every occasion. Daisy Flinger is the illustrious and affluent heiress to the great Flinger Darning Machine fortune. Never married, she lives in her mansion with a multitude of cats and claims: "You can never be too rich or have too many tabbies." While she wears the latest of 40s fashions, she believes she is never fully dressed until she is adorned with diamonds. Sharla "Shar" P. Knedelz is an Army nurse who is home from the frontlines, having recently returned from the trenches of war-torn Europe. Caring, compassionate, and comely, Barb joined the Garden Club thanks to her interest in the medicinal uses of plants. Proud of her profession, she wears her nurse's uniform wherever she goes. Ima Gardner is a gorgeous and glamorous movie star who calls Phunguss Flats her home whenever she's not working on her latest film. Hailed by Hollywood Today magazine as "the brightest star bound to burn out before her time," she is one of the most sought-after celebrities in America. Because of her fame, she absolutely, positively, in-no-way and under-no-conditions goes anywhere without wearing her makeup, as well as the most up-to-date, eye-catching attire. Sister Celeste "Cel" I. Bett is new to the local nunnery, run by the Sisters of Incessant Anguish. Having recently relocated from New York, Sister Cel is thoughtful and intelligent, and enjoys a wide range of interests, from science to foreign languages. Though she's an outspoken activist for peace, she rallies behind the efforts of the Allied Forces. Of course, she wears nothing but her nun's habit. All right, ladies . . . do you have a bridal shower or a baby shower coming up sometime soon? Or maybe a favorite friend is about to have a birthday, or maybe you're just looking for an excuse to get together with your female friends? Then here's your chance to add tons of hilarity to your gathering. Part of the irony of the game is that all the characters initially appear so prim and proper, in their hats and gloves, as they attend the Garden Club meeting. It isn't long before you learn that these ladies are anything but prim and proper! Kind of like real life, wouldn't you say? Costuming is very easy -- hats and gloves and dresses or suits. In other words, everyone can pretty much just go to their closets. If you like, you can play this game as a part of a luncheon, or play it in the evening with drinks and snacks. In any case, just relax and laugh with your friends!