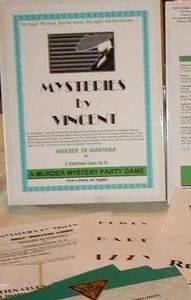 How to Host a Murder styled party game. No audio comes with these games, just clue booklets and party planner. MURDER IN MONTANA -or- A Railroad Runs to It Newly-Made Millionaire And Businessman, Rumford "Rum" Runnare, Invites You: To board the Nuthin' Specific Railroad traveling west from Chicago and the Midwest. Your final destination? The newest playground for the rich and the ritzy, Montana's recently opened Roaring Rapids Resort! Not only will you enjoy the activities of the Resort, but you'll also be driven by motor coach to the grandest marvel of all, a sightseeing tour through the rugged beauty of Yellowstone National Park. It's all the rage! Your ticket to fun and frolic awaits you: dated June 18, 1925, when flappers were risque' and prohibition was the rule. The festivities will culminate on Saturday night with a private dinner party hosted by Rum himself. (And because you'll be dining in Rum's suite, you might find the laws of prohibition to be a little . . . shall we say . . . less restrictive?) It should be a night to remember. That is, provided everyone makes it through the night . . . Your Dinner Companions Include: Princess Anastasia "Ann" L. Retentov claims to be the only surviving descendant of that great Russian Retentov line. And because of a little-known twist of history, she is the last remaining heir to the Russian throne, daughter of Czar Frugalin Retentov I and Czarina Wautor Retentov. Having fled the Bolsheviks during the Russian Revolution, Ann came to America for sanctuary. As a princess, she carries herself regally, being a classic Russian beauty and dressing in the finest of fashions. Dewey Kare, is a baseball legend who has redefined the game, being both a pitching phenom and a home run hitter. But being worshiped as a hero got tiresome for Dewey. So he recently retired, and has traveled to the wilds of Montana in search of a new adventure. Yet he never forgets his years in the big leagues, and always wears a baseball jersey. Cassandra "Cass" Piajammas is a lovely &amp; luscious starlet, having recently starred in her latest film, The Monotony of Marlene. And soon she is to grace the silver screen as Valentino's leading lady. Which is no surprise, considering acting is a talent that comes quite naturally to Cass. After all, her mother always did say Cass was a little melodramatic. But she's also a thoroughly modern woman of the twenties, a real flapper. And like most flappers, she's opinionated, daring and slightly out-of-control. Barry "Bare" Marquette is a Wall Street whiz known for his gutsy gambles and daring dealings. He loves the excitement of the market, with all the ups and downs, and the dangers as well as the chance to get rich quick. Born and raised in Chicago, he tried a number of jobs at home before finally going to New York to be near the market. And because he's much sought after by women, he dresses in the height of style, sparing no expense to look dashing and dapper. Isadore "Izzy" A. G. Mann has often been described as a chameleon-like character, easily able to change and adapt to any situation, at any time. Thus he always dresses to fit the occasion. And because he's come to Montana on vacation and wants to relax, he doesn't care to talk about his work much - though he will admit to being employed by the government. Focused and determined, he's a hard worker, and never quits until he gets the job done right. Stephanie "Steph" D. Rink is a prim and pretty prohibitionist, probably one of the most popular in the country. For her name is synonymous with sober. Often called Sister Steph, she's the founder of the Church of the Triple R - the Real Right Reformed. As a staunch activist and a prolific preacher, she's known to be quite vocal. And because she's always in the public eye, she's particular about her appearance, and often quick to follow the latest fashion fads. Senator Vito D. Beale is a United States Senator from Illinois. A man of great power and passion, politics is in his blood, as he comes from a well-established and wealthy political family. Vito chooses his issues carefully and then fights for them to the finish. Yet he's also quite charming and cordial to the voters, and because he's got an important public image to uphold, he always dresses to the nines. Mary Widdoe, is a strikingly beautiful and well-to-do young widow who just recently lost her husband. Now, wherever she goes, she carries the urn that holds the ashes of her late husband Ernie, for as she says: "He made me everything I am." Her friends describe her as being wonderfully charming and a great listener. And as a grieving widow, Mary often wears black, though usually in the form of designer dresses. This mystery game is especially fun for history buffs. Not only is the main storyline centered around Prohibition, but many of the characters are based (loosely) on actual historic figures. Izzy A. G. Mann, is a spoof on Izzy Einstein, one of the most famous Prohibition Agents of all. Of course, Princess Ann L. Retentov, is based somewhat on Annastasia Romanov. This game also has some special features that others don't have. For instance, a few of the clues are to be hidden around the room, and this game includes an "X" that marks the spot, though I won't tell you where. Costumes from the twenties are especially fun, as that was the era of flappers and men in wide-lapeled pinstriped suits. Also popular at the time was a train ride from Chicago to Montana, to enjoy the splendor of Yellowstone. If you like history, you'll love this mystery!