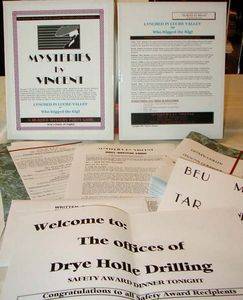 How to Host a Murder styled party game. No audio comes with these games, just clue booklets and party planner. LYNCHED IN LUCRE VALLEY -or- Who Rigged the Rig? It's July, 1952, and the oil industry has been booming in Alberta, Canada since the end of WWII. New oil reserves have been discovered just as fast as wildcatters can set up rigs and drill. As a result, new oil and oilfield service companies have been springing up like Alberta winter wheat. One such company is Drye Holle Drilling, founded by Mr. Dryesdale "Drye" Holle of Lucre Valley. And tonight, you've been invited to attend the company's First Annual Safety Award Dinner, in honor of Drye Holle Drilling's remarkable safety record. And of course, the affair will be catered by the local Crude Cafe. Now the real question remains: Will Drye Holle Drilling have an outstanding safety record for a second year in a row? In any case, one thing is certain, murder would definitely mar that record . . . Your Dinner Companions Include: Tarra "Tar" Sanze is a sassy secretary who mans the front lines of Drye Holle Drilling. Known for her smarts as well as her savvy, she's a tornado on the typewriter and a dervish when it comes to dictation. Pretty as well as proficient, she's had more than her share of suitors, but the oil industry remains the love of her life. She dresses to fit the occasion - pants or skirts for trips to the field and dazzling dresses for dinner. Derek Hand is the dashing Drilling Manager at Drye Holle Drilling, a company Derek has worked for since he and Drye returned from the War in Europe. Hard working and an industry expert, Derek's loyalty to the company is legendary. Because he's constantly on call, he prefers to wear casual work clothes. Madame Mae Kittup is an exotic beauty from the Ukraine, a gypsy woman whose psychic powers include telling the future via her magic pysankas, or Ukrainian Easter eggs. Sultry and mysterious, Madame Mae is employed by Drye Holle Drilling to locate oil reserves far beneath the Earth's surface. Yet she attributes her great gift to her grandmother, and prefers to dress in the clothing of her native land. Denver Driller is a rich and rugged oilman from the States, whose business frequently brings him to Canada, where he plans to reap the rewards of the country's bountiful resources. A world traveler, he's charming and charismatic, and a favorite among the locals. He dresses to suit the occasion, with a wardrobe that ranges from designer suits to dungarees. Olivia "Ol" Barrinesse could be described in three simple words: rich, refined and ravishing. Originally from Calgary, she's the daughter of the late Brigham Barrinesse, from whom she inherited her wealth, as well as her independent and highly profitable oil company, Brigham Oil. Ol is always dressed in the height of fashion, famous for her foreign shopping sprees and her bounty of baubles. Andre P. Renure is a bold businessman who provides a valuable service to the oilfield consumer by running Lucre Valley's only general store and restaurant, the Crude Cafe. A Frenchman from Quebec, he came to the West after the War, hoping to amass a fortune from his vocational ventures. Shrewd and sophisticated, his suits are the latest of fifties fashions. Beulah "Beu" T. Kween is a beaming beauty from the heart of bovine country, who was raised on a cattle ranch in southern Alberta. Having won more than her share of beauty contests, everyone says her future is bright, that she'll be married with a house full of kids before she can say "baby boom." Flirtatious and fun-loving, she currently works as a waitress at the Crude Cafe, where she earns enough money to keep her wardrobe stocked with delectable dresses. Royal T. Ohhner is an Alberta cattle rancher whose range reaches far across some big beefy underground oil reserves - oil reserves that are leased to and drilled by Drye Holle Drilling. Thus Royal often jokes about raising both crude and cattle, which have proven to be real cash cows for him. A real grass roots kind of guy, he's never been one to steer away from hard work. He wears nothing but Western attire. This mystery game features a Western Canadian setting. (If you've never seen Calgary and the Canadian Rockies, then you've never really lived!) So, of course, we used some classic characters that you might find in that neck of the bush -- the Frenchman from Quebec, the Ukranian woman and her psyankas (decorated eggs), a cattle rancher and the people in the oil industry. Of course, there's also a mention of playing hockey. Besides all that, it's set in the early 1950s, which provides so much opportunity for costumes, as well as setting the mood. People can dress either 1940s or 1950s style, and you can easily play music from both decades. All and all, it's a fun romp, with the same lunacy and ludicrousness as the rest of our mystery games. Watch out for the surprise twist at the end!