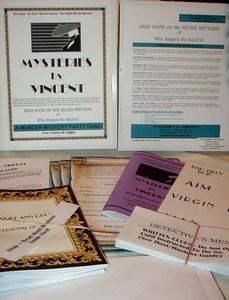 How to Host a Murder styled party game. No audio comes with these games, just clue booklets and party planner. High Noon on the Silver Spittoon -Or- Who Reaped the Ritch's? Go West young men and women! The date is September 14, 1885, and you've been invited to join R. Eli Ritch, Colorado cattle baron and railroad tycoon, known for his power as well as his politics. You and his private party will take a weekend pleasure trip on that famous train, the Silver Spittoon, as it winds through the splendor of the Rocky Mountains, from Durango to Telluride. Of course, you'll be staying in one of Mr. Ritch's private Pullman cars, as well as eating in his private dining car. And on Saturday night, you'll enjoy a special celebration dinner, courtesy of Mr. Ritch's hospitality. So pack your petticoats and pantaloons and hop aboard! It promises to be a weekend to remember. And for some, the opportunity of a lifetime . . . Your Dinner Companions Include: Mariam Ritch is the wife of your host, R. Eli Ritch. Refined and ravishing, she runs the Ritch household so Eli can run the ranch. For she's a woman who knows her priorities and her place, and puts her husband first. Always wearing the latest of fashions from the East, she's a real society lady. Though it's rumored that her past may not be so reputable . . . Bad Billy Bob Bobbitt is a rawboned rambler, known to travel from town to town, though no one seems to know what he does for a living. And while he's as good with a gun as he is at the gambling table, word has it his picture has been seen on more than one Wanted Poster. Shifty and shady, he's usually dressed to ride the range. Burgandy "Bur" Dello, a favorite at the local watering hole, the Sure Shot Saloon, is the Belle of the Bar and star of the cancan. Having gotten her start in San Francisco, she prefers life in the wilds of Southern Colorado. She's saucy and showy, and known throughout the West for her charms that men just can't resist. Chief Lost'Um Land is an elder from the little-known Sowee tribe, formerly located high in the Southern Rockies, but now living on a desert reservation in New Mexico. Diplomatic and insightful, he's greatly respected among his own people, as well as the white men's agencies. For he often says, "It's never a good day to die." And of course, he always dresses in his native attire and carries his hatchet everywhere. Virginia "Virgin" Gnomoire, is the local school marm, having relocated to the Wild West from the civilized East, where she received her formal education. She's intelligent, articulate, and patient with her students. But beneath her prim and proper exterior, as well as her conservative clothing, she's a raging beauty. S. Cooper "Coop" DeNuze, is also from the East. Both a newspaper writer and a novelist for 7¢ novels, he's come to the West to capture the colorful characters that have aroused the curiosity of Easterners. Outgoing and inquisitive, Coop prides himself on getting the story that sells the copy. He always dresses professionally,and since he's been out West, he sometimes wears a combination of Eastern and Western attire. Manfred "Man" Euell Laybore, is a hard-working, honest man whose backbreaking efforts helped build the railroad that Eli now runs. Strong and ruggedly handsome, Man is known to be up front and direct in his dealings. Yet he's widely popular with the other railroad workers and known to be a leader when it comes to labor issues. His attire usually fits the occasion: whether that means working on the tracks or attending a Sunday social. Aimee "Aim" Ann Chute, is considered the best aim in the West, and is the star of Beaver Bob's Mild West Show. Independent and headstrong, she first learned to shoot to put food on the table. Now as she travels the countryside with the Show, she lets no man run her life. She's considered a woman years ahead of her time and often wears pants or pantskirts. See the West as it never was . . . Or at least, we hope it was never like this . . . Not only does this game have some amusing and not-too-terribly-bright characters, but this game is especially fun when it comes to costume potential! When your guests arrive at your party wearing 1880s attire, you'll see a complete transformation of their personalities. This is your chance to travel back to a colorful time in history, when the West was still wild and untamed. The setting is Durango, Colorado, where an 1880s train still takes sightseers through the splendor of the Southern Rockies.