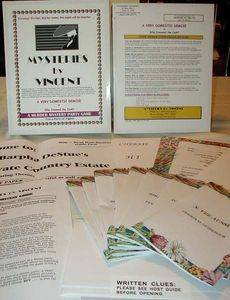 How to Host a Murder styled party game. No audio comes with these games, just clue booklets and party planner. A Very Domestic Demise -Or- Who Creamed the Cook? Ms. Barpha DeStue, that queen of culinary creativity, that heroine of homemaking and handcrafting, not to mention, star of prime time TV and best-selling cookbook author, has invited you, (Lucky, lucky you!) to attend a party at her private country estate. Of course, the focus of the festivities will be to honor the winners of the Barpha DeStue Whine &amp; Dyin' Contest, soon to become an annual event. Provided, of course, that all goes well . . . For Barpha DeStue is sure to make a meal that is TO DIE FOR . . . Your Dinner Companions Include: Toto Lee Smytten is the President of Barpha DeStue's fan club, the Barphalots, and has taken the club to places it's never been before. Often described as being "driven," he prefers to use the word "focused." For he's the kind of guy whose train only runs on one track. Meaning: He never forgets his priorities - especially his number one priority. Because he's often in the limelight with Barpha, he's always dressed so he's ready to help with any home remodeling projects, and he never goes anywhere without his tool belt. Cherrie S. Ghubellee is a woman of many minds and moods, and can easily switch from being a serious businesswoman to a free-spirited artisan in the blink of an eye. She holds the title of Foods and Cooking Editor for Barpha's internationally acclaimed magazine, Existing. While always dressed as the professional, personally, she's well-liked and empathic, a natural team-player. Hiram "Hi" K. Lesteral is a world-class tennis pro, known for his backhand as well as his passionate persona on the court. Both bold and brawny, with his professional ranking he can easily afford such emotional antics, having amassed a few US Open championships and having come so close to that most notable of all crowns - Wimbledon. Yet he does have one other claim to fame: He's Barpha DeStue's ex-husband. N. Vee Ausse is a happy homemaker from Winnemucca, Nevada, and one of the winners of the Barpha DeStue Whine &amp; Dyin' Contest. Though she spends most of her time taking care of her husband and two teenage children, Vee loves to entertain and is also quite active in her community. For in her own way, she wants to make the world a better place for her children, and her children's children. She's often asked if she'll become politically active someday. But she quickly declines, saying she's not really cut out for life in the public eye, and prefers to be more of a behind the scenes kind of person. Marin Nate' is a transplant from France and once billed as the top chef in the country. His credits include such items as having hosted a gourmet cooking show and writing a syndicated column. And let's not forget about his long line of specialty cookbooks, with such titles as: You Say Fricassaw, I Say Fricassee - I'm Right." Yes, Marin's name is synonymous with "Mean Cuisine" in this country. But after living the high-pressure, fast-paced life of a celebrity, he's decided to take things a bit easier and accepted a position on the staff of Barpha DeStue, where he can spend all his time creating culinary delights. Borissa "Bor" D. Stiphe is a homemaker from the Hoosier state, as well as the wife of an insurance salesman, Reilly Stiphe, and the mother of their three darling children. She's also a winner of the Barpha DeStue Whine &amp; Dyin' Contest. It's such a thrill for her, considering she's a big Barpha fan. For Barpha's books and TV show have been an enormous help to her in her role as a homemaker. Thus Bor has constantly followed Barpha's activities, always keeping up on the latest Barpha innovations. And now Bor is so excited to finally have a chance to meet up with Barpha - up close and personal. Tilly V. Isone is the wonderfully talented and innovative producer of Barpha DeStue's weekly half-hour television show, Existing with Barpha DeStue. Because Tilly knows just how to coax the perfect performance out of any public personality, she's played a huge role in Barpha's success, helping to transform her name into a household word. Charming and easygoing, Tilly often dresses in the same comfortable casualness as Barpha herself. Because everyone knows, life in the television world can be very erratic. But for Tilly, there could be no other life. Ray Zhor Sharpe is a traveling knife salesman who supplies Barpha with all her cooking and crafts cutlery. Having had Ms. DeStue on his client list for many years now, Ray has always been highly dependable in providing her with the finest cutlery in the business - something that's terribly important to one who has such a great need for knives as Barpha. Personally, Ray is a no-frills, old-fashioned kind of guy, who works hard to support his family. This mystery is a parody on one of the great home entertaining gurus of our time, whose name we shall not mention . . . In comparison, this game is written for those of you with very busy lives, who still want to do a little entertaining now and then. This mystery is one of the absolute easiest games to host! Ordering pizza to be delivered is actually written into the game, and to decorate for the party, we recommend using Barpha's suggested theme: "Tools and Toilet Paper, Beautiful as well as Functional." Yes, after taping the enclosed poster to the front door, you may proceed to decorate your dining/living area with toilet paper bows and streamers, and add a few pairs of pliers and screwdrivers to complete the effect. Then, of course, as your guests arrive, you're supposed to act as though such a decorating theme is simply divine! Yes, this is one party that you and your guests will never forget . . .