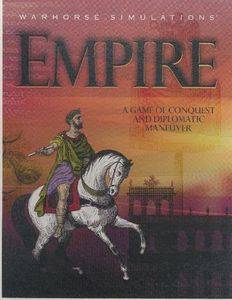 Empire is a strategic level, traditional hex grid and counter wargame set in a hypothetical ancient era continent. The game is best with 4 players but can be played with 3 or 2. Players must manage the economic, diplomatic and military affairs of their faction as they vie for control of the Empire. Piece density is low – 117 units. The game is low to moderate complexity by traditional wargame standards. The map contains 15 (fictional) provinces of varying sizes and terrain. There is a large ocean area. Each Province produces Tribute (in gold coins) for the player who controls it, the amount depending upon the number and size of cities in the Province. Tribute is spent on building units, supplying units in the field, diplomatic initiatives, building fortifications, hiring mercenaries, and bribing other players. Military units are Light and Heavy Cavalry, Light and Heavy Infantry, Imperial Guards Infantry, Warships and Siege Engines. No province can produce all of these and some can only produce 1 or 2. Units attain Veteran status after engaging in battle, which increases their effectiveness. Mercenaries can be hired from neutral provinces but cost more to supply than regular units. Naval battles and amphibious operations are possible (and may be necessary, as one Province is an island). Units use an innovative combination of area movement (in friendly territory) and hex-by-hex movement (elsewhere). Cavalry moves first and, uniquely, exerts a Zone of Control. Each Province may, at any given point, be neutral or controlled by a player. Control may be obtained by military means (by occupying all of the province’s cities) or political. A wide variety of events trigger an “Influence Check”, which can result in a change of Political Control. The Political Control system is really the heart of the game. The turn sequence consists of interlocking phases: each “year” contains an annual phase for collecting tribute and resolving control changes, 4 seasonal turns for building and supplying units and conducting diplomacy (etc.), and 12 campaign turns for military operations (campaigning in winter is more costly). The map is printed on glossy paper; the counters are on thick cardboard but need to be cut out. Overall, Empire presents some innovative game mechanics which complement its theme well. Fans of ancient era wargames or games with a strong diplomatic element should take a look.