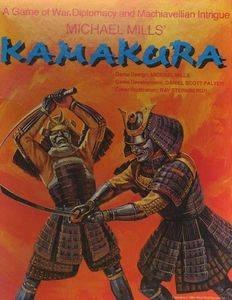 From the rules: "Kamakura is a game of war,diplomacy and Machiavellian intrigue in Japan during the Kamakura Shogunate (1192-1333), the period in which Japanese feudalism and the samurai class reached their full development. Two to six players, representing various clans and other powerful groups, maneuver their forces, fight battles on land and sea, and conduct negotiations with other players in an attempt to become the dominant power in Japan and to assume the title of Shogun."