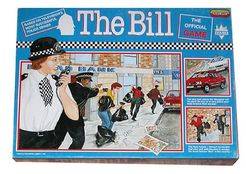 Based on the British TV Series "The Bill". The game involves a team of villains and a team of police moving around the board on foot or cars. The board consists of houses with hidden values which can be robbed by the criminals. Then it is up to the police to catch them before they reach the safe house. Cars can be abandoned and police are able to set up road blocks. 1 die is used for travel on foot, 2 dice for cars on the streets and 3 dice for movement on motorways. The game is over when all villains are in jail at the same time (police win) or the criminals combined stolen goods is more than 1 million dollars (villains win).