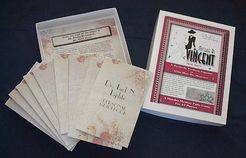 How to Host a Murder styled party game. No audio comes with these games, just clue booklets and party planner. A Perfectly Perilous Pageant -or- Who Shot the Shoo-in? It's time once again for the annual Ms. Medusa Pageant, a beauty pageant sponsored by Medusa Hair Care, Inc. for women of all ages. This year, Ms. Sella Konn, the reigning Ms. Rocky Mountains, is just sure she's a shoo-in. In fact, she's so sure she'll win the crown that she's planned a little pre-pageant celebration, a party that many might find presumptuous, to say the least. So put on your best pageant attire, sharpen your claws and come join the party. Then watch the sparks and accusations fly, because everyone knows, the competition at a beauty pageant can really turn ugly . . . The Character Roles Include: Rinah Plastee is a Ms. Medusa Pageant contestant, having recently won the title of Ms. Texas Panhandle. A waitress from Odessa, Rinah is a twice-divorced mother of three. Determined, dedicated and driven, she's sure her pageant talent of skeet shooting will wow the judges and make her a winner. She always wears her Ms. Texas Panhandle crown and sash with her elegant gowns. Nathanel Parks is the dashing and adorable host and announcer for the Ms. Medusa Pageant. But he is most famous for singing the Ms. Medusa song every year when the winner is crowned. Charming, chatty, and chipper, he is a precision performer and claims to have show biz in his blood. For evening events, he wears the same tuxedo he wore when the pageant first started ten years ago. Sharon Sharalyke is the reining Ms. Medusa. A native of Milwaukee, Sharon was originally crowned Ms. Urban Sprawl. She is a professional caterer and home-entertaining expert who now hosts her own cable TV show called "Domestic Dazzle." Creative, confident, and capable, Sharon specializes in bringing back the abilities of bygone eras. She sews her own elegant evening gowns and never goes anywhere without her Ms. Medusa crown and sash. MaeBea Shellwin is a telemarketer from Topeka. She is also a Ms. Medusa Pageant contestant, having been crowned Ms. Great Plains just months ago. Her talent of a dramatic reading from her favorite romance novel really swept the judges away. Sweet, sappy, and sentimental, MaeBea claims to be a hopeful romantic, meaning she hopes to bag the Ms. Medusa crown in order to bag a husband. She prefers soft, dainty gowns, and always wears her Ms. Great Plains crown and sash. Dr. Tuck N. Liphte is one of the world's foremost plastic surgeons, sometimes called the King of the Collagen injections. With the right surgery and medical procedures, Tuck claims he can make any woman stunningly beautiful. Sociable, sophisticated and sardonic, he takes a personal interest in his patients' well-being and often makes house calls. He wears the utmost of evening fashions. Taykano Priznerze is another Ms. Medusa Pageant contestant, having won the title of Ms. Continental Divide. A taxidermist by trade, she owns her own company called "Stuffed with Style," whereby she specializes in decorating her subjects with sequins and rhinestones. She plans to use her stuffed animals in her ventriloquist act for the pageant's talent competition. Smart, swank, and sultry, she prefers sparkling gowns to go with her Ms. Continental Divide sash and tiara. Botan Paydphor is the head judge of the Ms. Medusa pageant. As a former halfback for the Peoria Pigeons, a semi-pro football team, he feels fully qualified to be a beauty pageant judge. Slick, suave, and self-assured, Botan enjoys hobnobbing with the bevy of beauties who enter the pageant. He usually wears a tuxedo or a perfectly tailored suit. Charmyn Lee Slick is a former Ms. Middle-Of-Nowhere and was crowned the first Ms. Medusa 10 years ago. Thanks to the scholarships awarded by the pageant, Charmyn earned her Ph.D. in Interstellar Communication and became a key radio astronomer for FETA. Tenacious, talented and temperamental, she recently became the fulltime Pageant Director for the Ms. Medusa Pageant. She wears flashy evening fashions, accessorized by her Ms. Medusa crown and sash. Harry Medusa is the President and founder of Medusa Hair Care Incorporated, as well as the corporate sponsor and founder of the Ms. Medusa Pageant. Harry is applauded by women everywhere, both for the creation of his company's products and for considering the needs of his customers. Sincere, sensible and systematic, Harry dresses in conservative clothes. Wiley Wheazle is a talent agent from Southern California. A man who flashes his thousand-watt smile as easily as he flashes his credit card, Wiley brags about being able to carry on a conversation with anyone. He constantly promotes his stable of stars, and claims to work round the clock, even while he's sleeping. Personable, persistent, and persuasive, Wiley wears only retro styles. Let's face it . . . we've all been under way too much stress lately . . . And this is the game to take that stress away . . . Yes, a Perfectly Perilous Pageant is just good, wacky fun. After a night of laughing over this incredibly unusual beauty pageant, you'll forget all about the woes of the world or your work for a while. Plus, this game provides everyone with a chance to dress up for a night. The women can all wear gowns and crowns, which can be especially fun, since, let's face it, women simply don't wear crowns enough these days . . . It's perfect for holiday entertaining, especially New Year's Eve.