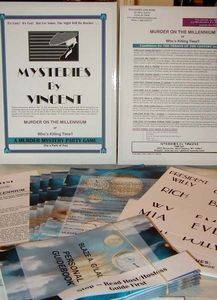 How to Host a Murder styled party game. No audio comes with these games, just clue booklets and party planner. Murder on the Millennium -Or- Who's Killing Time? It's the turn of the Century, and you're standing on the brink of a whole new Millennium. What an exciting time to be alive! Especially since you've been invited to attend a very special Millennium New Year's Eve dinner given by that famous entrepreneur and inventor, Millford "Mill" N. Iam. Yes, Mill has invented a time travel machine and will be transporting one outstanding individual from each decade of the last century to attend this extraordinary dinner. Of course, the party will be held at Mill N. Iam's historic castle of a home, in sunny Southern California. When dinner is over, all the attendees will cast their vote for the Person of the Century. It's a party you won't want to miss, a real once-in-a-lifetime event, a night to reminisce about days gone by . . . That is, for all who live to remember . . . Candidates for the PERSON OF THE CENTURY include: (By Decade) 1900-1910, Emma Rhymere is probably the foremost poet and novelist of the last century. Born and raised in Boston, she's traveled the country by train, reading her book of poetry, Moors, Mores, and S'mores, to the uneducated masses across the Western frontier. Criticizing the gluttony of the rich, Emma is level-headed and lovely, and wears the high-collared, lace-adorned clothing of her time. 1910-1920, Mia Curall is easily considered the greatest scientist of the twentieth century. Having won Nobel prizes for both medicine and physics, her greatest claim to fame came when she discovered a cure for Bigpox. She's often described as being methodical and a little bit maniacal when it comes to her work, though socially, people say she has an electro-magnetic personality. She wears the latest of post-war clothing. 1920-1930, Rich A. Phellar, the owner of Substandard Oil, is easily the wealthiest man of the twentieth century. Having inherited his money from his father, Rich considers himself a true blueblood. Though he's hard-nosed and hard-handed when it comes to business, in social settings he's refined and respectable, a true gentleman. Of course, he wears only tails and a top hat for evening events. 1930-1940, Scarlett Harlot is probably the most gifted and gorgeous actress this century has ever known. The original fainting femme fatale, she has starred in such box office hits as: It's a Wonderful Wife, and The Lizard of Schnoz. Scarlett believes a good actress should be demure and sweet, a thing of beauty like a fine painting or sculpture. She wears only the most glamorous and glitziest of evening gowns. 1940-1950, General George S. Lapem is considered one of the greatest military minds the US Army has ever known. His amazing leadership abilities, along with his talent for combat strategy, played a huge role in the winning of World War II. Gruff, rough, and tough, the General was raised in a military family and comes from a long line of Generals. He only wears army fatiques or his uniform wherever he goes. 1950-1960, Eve N. Louder is probably the greatest fashion designer of the century. But she's also the founder of Eve N. Louder Cosmetics, one of the world's top-selling companies when it comes to make-up and perfume. Rich, spoiled and eccentric, Eve considers herself to be the original fashion police, claiming her only real goal is to make the world a more beautiful place. She always wears dresses of her own design. 1960-1970, Blaze A. G'laury is an all-American hero, one of the first men in space, circling the globe during a top-secret space mission, better known as the Neanderthal project. Originally from Oklahoma, Blaze is a big, brave, brawny and brainy guy, who grew up reading science fiction. Not only does he have the right stuff, but women everywhere refer to him as "Mr. Right." Blaze wears jumpsuits wherever he goes. 1970-1980, Polly Esther Pance is probably the most influential journalist and activist this century has ever known. Founder of The Save the Sasquatch Society, an organization dedicated to the preservation of Big Foot, Polly has been involved in sit-ins and shutouts, march-downs and walkouts. She only wears the finest polyester clothes and never goes anywhere without a hefty slathering of blue eyeshadow. 1980-1990, Wylie "Wy" Toukay, is considered one of the greatest entrepreneurs of the century, having essentially created the personal computer industry as well as the software industry that goes along with it. With an I.Q. that tops the genius range, Wy ushered the world into the Information Age and became a ga-zillionaire in the process. Wy dresses purely for comfort, never really caring about what he wears. 1990-1999, US President William "Willy" Groper is probably one of the more colorful presidents of the century. Described as having a dichotomous disposition, he's often charismatic and calculating, charming and crafty. With his award-winning smile, Willy is a real go-getter, a man whose cause has unfortunately, caused a few improprieties. Willy only wears clothes that bare a Presidential insignia. This is an especially fun game if you and your guests plan to dress in costumes! Because the character roles span the entire century, everyone will be wearing fashions from a different decade. Hence you'll have Emma Rhymere in her long skirts comparing herself to Polly Esther Pance, in a pantsuit or mini-skirt. How shocking! The true gentleman, Rich A. Phellar, will be appalled by Wy Toukay's casual attire, especially at dinner! To make things even more fun, the characters from the later decades will already know the history which the characters from the earlier decades are living. Plus, the characters from the earlier part of the century will be amazed by the world of the future, the world of computers and faxes and fast cars. All in all, this game has a number of interesting dimensions that will keep your guests entertained for hours!