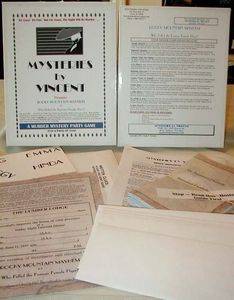 How to Host a Murder styled party game. No audio comes with these games, just clue booklets and party planner. ROCKY MOUNTAIN MAYHEM -or- Who Felled the Famous Female Flyer? The year is 1937, and while the Great Depression is nearly over, whispers of war are in the air. Roosevelt has started his second term and the Golden Age of Radio is in full swing. You've just spent a week in the glorious splendor of the Colorado Rockies, where the warmth of the June weather has turned the mountains into a breathtaking bouquet of wildflowers, while the pines whisper in the wind overhead. As a guest of the Lumber Lodge, you've enjoyed hiking and horseback riding, painting and pottery classes, and just sitting on the back porch reading a good book. Ah, yes, the retreat has truly renewed your spirits. What could possibly upset the sense of serenity you've come to find in this Rocky Mountain hideaway? But alas, all good things must come to an end. So tonight, come join your fellow frolickers, (many of whom are famous!), for a Friday night farewell dinner. It's sure to be a celebration that will live in on the memories of all. That is, in the memories of all who live to remember . . . Your Dinner Companions Include: Wanda Munnie has recently resigned from the Rockettes and is on her way West to Hollywood. As a natural when it comes to acting aptitude, she's certainly destined for fame and fortune. Once in Tinsel Town, Wanda wants to wangle her way into the starring role of Hollywood's biggest movie ever: Gone with the Water. Languid, lovely and a little bit liberal, she always wears the latest of '30s fashions. Sigmund Fluoride is an internationally acclaimed German doctor, famous for his innovative combination of psychoanalysis and dentistry. Best known for his "edible complex," Sigmund teaches that a tooth will never change unless it really wants to. Truly loved by his patients, he goes to great lengths to make their lives more enjoyable. He wears his white doctor's jacket at all times. Allison "Allie" Bye Riskie is a grand dame from England, world famous for such mystery novels as: The Man in the Burnt Orange Suit and, And Then There Was Nobody Left. Having amassed a great fortune as a novelist, she is often seen dripping with diamonds. She's independent, outspoken, and always in need of adventure. Though strangely enough, wherever she goes, someone turns up dead at dinner . . . C.O. Pilate is most famous for having flown second in command to that famous female flyer, Sheila "She" S. Earbourne. An outstanding pilot as well, C.O. is magnanimous and methodical, and always dresses in pilot's attire. And while C.O. has taken a backseat to She S.'s notoriety, C.O. does have one claim to fame that even Miss Earbourne can't top - on a solo flight, C.O. saw aliens from outer space. Madame Liza Lott is an exotic beauty from central Europe. Having come from a long line of gypsy fortune-tellers, Liza hopes to help humanity by revealing the future, a future she claims will never hold another World War. Often described as being mysterious and melodramatic, Liza prefers to dress in the costume of her native land. Turner "Turn" N. Kafkaff is an Austrian author famous for his existential writings, especially his collected works known as: The Elongated Euphemisms. Most elaborate of his euphemisms is: Toast in the tummy is as good as bread in the belly, unless you happen to be dead. Never a slave to fashion, Turn tends to dress in a style all his own. Hinda Berg is a daring dirigible pilot from Germany who truly believes that blimps will be the transportation of the future. That's why she's currently writing a "How-to" book on piloting the gigantic gasbags. Hard-working and disciplined, she's not afraid of the grunt work that goes before the glory. She prefers simple, unadorned clothing. J. Ellis Mann, a columnist from a small town Kansas newspaper, is best known for his oblique obituaries. For as Ellis has often said, "You're never really famous until you're dead." Ingenious and introverted, Ellis is usually described as being egotistical and eccentric. He is never seen without a cashmere cardigan and bow tie. Emma Q. Wac is a doctor from New York who truly stands on the cutting edge of medical technology. A brilliant physician, Emma specializes in treating rare cases and hardly ever has a moment to herself. Famous for her bedside manner, Emma is sleek, smart, and sophisticated. She wears only designer dresses. B. Iggy Mowth is a nationally loved radio show performer, who, along with his wife, stars in the B. Iggy and Windee Mowth Hour. "Wise, witty and wonderful," is how Iggy is often described. For he's a man who is never too busy to frolic with his fans, especially his female fans. Iggy always wears the latest of '30s suits. This mystery game is a spoof on the final fate of Amelia Earheart, though it's a much more interesting version than some of the more popular theories of the day. (She landed on an island? How boring is that?) This game actually has a mystery within a mystery, and you'll enjoy the international cast of characters. Quite the convoluted bunch! Also, the character of C.O. Pilate is written with the option of being played either as a female or a male character. This is a mystery that makes history humorous!