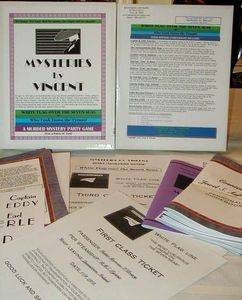 How to Host a Murder styled party game. No audio comes with these games, just clue booklets and party planner. White Flag Over the Seven Seas -Or- Who Took Down the Tyrant? This murder mystery game for 10 players is set during the last dinner on board the great luxury liner, only hours before it sank. Here's your chance to enter the world of Edwardian opulence, and see what it was like to be aboard one of the most famous ships of our time! It's April 14, 1912, and you've been aboard that luxury liner deemed unsinkable, the R.M.S. Tyranic, sailing from Southampton to New York on her maiden voyage. Though some call it the "Ship of Dreams," you soon learned it should be called the "Ship of Schemes," especially after meeting Mr. Ty Rante, President of the White Flag Line. Tonight you've been invited to join him for an exquisite dinner party, one that could prove to be as chilling as the icebergs floating around the North Atlantic this time of year. So come inside to the First Class Dining Saloon, to a dinner just sparkling with Edwardian opulence. YOUR DINNER COMPANIONS INCLUDE: Captain R. Eddy Touretire, is the dashing and daring captain of the R.M.S. Tyranic. Having enjoyed a long and distinguished naval career, the maiden voyage of the Tyranic will be the last for him. He'll be sad to say goodbye to the high seas and intends to retire to a small cottage by the British shoreline. Of course, he always wears his captain's uniform. The Inextinguishable Milly Beige, as she's often called, earned her nickname after surviving 5 shipwrecks, 3 train collisions, one plane crash and a bad case of lockjaw. A radiant and ravishing member of the nouveau riche, she's an American millionairess who's not afraid to spend her estranged husband's money. She's always dressed to the nines and never goes anywhere without her lucky Egyptian statuette. Countess Jewel S. Auplintee is one of the loveliest and most ladylike members of the Austrian aristocracy. Dignified and delicate, she is known for the abundance of jewels she's collected since childhood. As a Countess, she keeps apprised of the affairs of state, and doesn't believe that war is coming. Of course, she wears only elaborate, jewel-encrusted fashions. Thurstan "Thur" D. Klaas is a freewheeling, free-spirited amateur artist, who was lucky enough to win a ticket aboard the Tyranic in a last minute poker game at a pub near the docks. A man who lives from dime to dime and dollar to dollar, Thur makes his living as he goes. Ruggedly handsome, he has the muscles to prove that he's used to hard labor. He wears the only clothes he owns - corduroy pants, a high-collar shirt and a tweed jacket - unless, of course, he should happen to borrow a tuxedo for dinner. Primrose "Prim" Ann Propper is a governess by trade and responsible for the education and upbringing of the two young Morganstine children. Pretty and particular, she is a woman of high moral standards and comes with excellent references. She boarded Tyranic against her better judgment, having endured weeks of premonitions and omens, warning her that the ship will meet with disaster. She wears either high-collared, conservative clothing, or borrows an evening gown from her employer for dinner. Dr. Grayden "Gray" V. Deeger is a German Egyptologist, famous for his survival of King Tuff's tomb. Having unearthed more than his share of gold and lapis-laden treasures, his exploits have made him famous in his country, with the Kaiser being his number one fan. Dr. Gray is often described as an eccentric intellectual, willing to sacrifice all for his science. He usually wears a tweed suit or a tuxedo for dinner. Senorita Suelita "Sue" Parficial is a flashy, fiery and famous Flamenco dancer, a woman of both great grace and passion. Born in Chihuahua, Mexico, her parents sent her to Europe to study dance when she was a young girl. Now she has been summoned home to Mexico by her father, a wealthy cattle baron with strong political connections. Sue always wears the latest of Paris fashions, though they tend to be more flamboyant than most. Father Morrosse O'Dreary is an Irish Catholic priest, known for his sermons on the sanctity of suffering. Once considered a candidate for pope hood, he now heads a small parish in the Irish countryside, at the Church of Our Lady of Incessant Anguish. Father O'Dreary always wears his priestly collar and black clothes, and discreetly carries a whiskey flask wherever he goes. Lady Mya Arstite is an enchanting and elegant member of the British aristocracy. She is famous for her exquisite balls and lavish dinner parties, and is possibly the utmost socialite of the new century. Claiming to know anyone worth knowing in all of Europe, Lady Arstite is among the growing numbers who believe that war is inevitable. She wants to take one more pleasure cruise before the shells start flying. She wears only the most up-to-date evening gowns from Paris. Earl of Teetom, Erle Grey is a rich and refined member of the English upper crust, who lives on the enormous medieval estate that has been in his family for centuries. Despite his nobility, the Earl is a businessman and owns his own tea-processing and food-packaging plant. Well-mannered and quick-witted, the Earl's dinner attire is strictly white tie and tails.