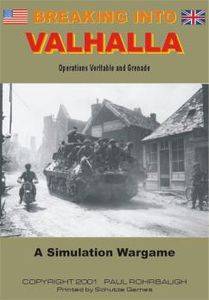 An introductory level, two player game on Operations Veritable and Grenade. They were the operations undertaken by the Allies to break through the German's West Wall fortifications and cross the Rhine. These campaigns were fought during February and March 1945. Despite the looming defeat the Germans faced, the Wehrmacht was still able to put up a stiff defense. Fought in inhospitable terrain and terrible climatic conditions, United States as well as Commonwealth troops from Canada and The UK launched an offensive that General Bernard Law Montgomery hoped would finally bring them over the Rhine and a war-ending victory. Scale: 1 hex represents 1.5 miles across 1 turn represents 2 days of real time The game consists of 15 turns. Military formations are: 1) Infantry are either battalion, regiment, brigade of kamprgruppe. 2) Armour is in brigades or regiments. 3) Air units mark were airstrikes occur.