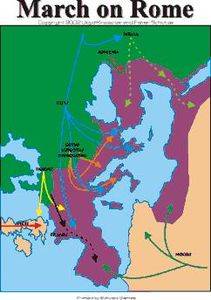 THE DECLINE OF THE ROMAN EMPIRE Spend your tribute wisely and co-operate withe other players and perhaps Rome need not succumb to the ravages of invading barbarians and internal revolt but the questions will still remain, who will be Caesar and who will be remembered by history ? March on Rome is a multi-player family oriented game set in the declining Roman empire. Up to 4 players compete against events and each other to ensure their name is remembered by history. COMPONENTS 11x17 inch map representing the Roman empire and surrounding barbarian nations 1 sheet of 187 die cut counters showing Roman legions, barbarian hordes, money and control markers. One rulebook 6 sheets totaling 78 action cards 1 players aid sheet