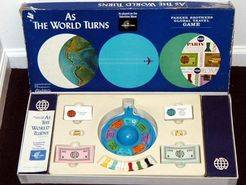 "As played by the Hughes family on the Television Show As The World Turns." The game mechanics are very similar to the "shortened game" version of Monopoly. Players are dealt Passport and Travel cards at the beginning of the game and pay the Customs Fund (bank) the value of those cards. Players then take turns moving their pawns around the board. If they land on a city space, they pay the indicated amount to the owner(s) of the passport(s) for that city. Landing on other types of spaces results in various actions like drawing a Customs card, spinning the world spinner, and moving off-course. The winner is the person with the most money when the game ends. The game ends when a player completes both legs of the course and lands on the "home" space. Triggering the end of the game is optional: if a player doesn't think he/she has enough money to win the game, they can pass the home space and continue along the second half of the course.