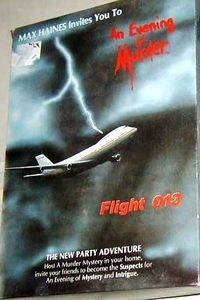 One in the series of "Max Haines Invites You To An Evening of Murder (tm)" party games. Plays like the "How to Host a Murder" series. This particular edition is "Flight 013." It's in a smaller box than all the other editions and may have been associated with Waddington Games (damaged box, can only read 'Wadd'). From the invitations... Crime Scene: Thomas Reed was traveling with eight friends and associates on board a commercial jet. They were going to a press conference and gala celebration party to announce the merger of Reed's company with Lawrence Hendricks' company. Everyone was gathered in the upper lounge enjoying drinks when the jet encountered a thunderstorm. The severe turbulence created a convenient cover for someone to murder Thomas. The Suspects: Lawrence Hendricks II, Age 29. President of Hendricks International. Young and ambitious but have the pressures of his top executive position pushed him too far? Carla Hendricks, Age 27. Vice President - Public Relations of Hendricks International. Lawrence's little sister - with ideas of her own about how things should be run. Victor Swanson, Age 47. Head of an international charity organization and a firm believer that charity begins at home. Lynda Swanson, Age 30. Victor's wife and assistant in his fund raising projects. Could her unborn child be a clue in this murder? George Mulligan, Age 34. Star of a popular T.V. series. Has his recent fame and sex appeal opened one too many doors? Constance Edwards, Age 30. A stewardess on the ill-fated flight 013. Was she serving coffee, tea, or... Murder? Richard Durante, Age 32. Thomas Reed's bodyguard. A brute of a man with a temper to match. Misty Reed, Age 39. Thomas Reed's wife... now a beautiful widow and beneficiary.