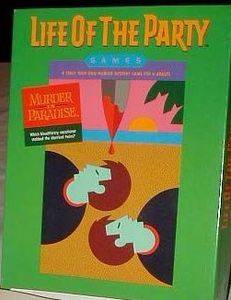 Milton Bradley produced 8 mystery party/role playing games (in the vein of How to Host a Murder) in 1987. They were all called "Life of the Party" games, four mysteries and four murders. The back of all boxes indicates that these are also copyright Jamie Swise Games, as that outfit produced several of their own titles (and several, if not all, of these) a few years earlier. Copyright date below is based on the Jamie Swise date on the invitations. Episode: Murder in Paradise (1986) You are one of ten people who won all-expense-paid trips to O Ma Ka La Pu A Uu Wahine le O Kale I O Kamaka E A, an island in the South Pacific. You received an invitation in the mail and a cassette tape which contained the island's Department of Tourism theme song. While it is not the most convenient time for you to take a trip, you felt compelled to honor the offer. On the third night of your stay, during the treasure hunt, two of the guests were murdered. They were identical twins Joel and John Rogers. The brothers were very wealthy traders of precious metals and two of the most disruptive and obnoxious people (once) alive. The remaining eight people are suspects in the crime.