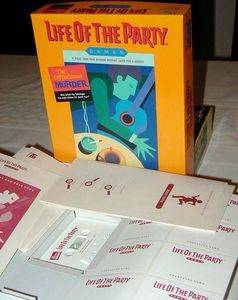 Milton Bradley produced 8 mystery party/role-playing games (in the vein of “How to Host a Murder”) beginning in 1987. They were published as "Life of the Party" games; four mysteries and four murders. These are also copyright Jamie Swise Games—the designer of the games, who produced several other titles (and many, if not all, of these) a few years earlier. Episode: The Coffeehouse Murder Folk singer Jeremy Swain was found dead in an apartment above the Gate of Fate Coffeehouse. He had just finished a two night engagement at the club before embarking on his first national tour. It was very uncool what got laid on poor Jeremy. Like, it was a stone drag. Dig. Invite some faces over to the crib, make a scene, and riff on who did the cat up.* Translation within The Time: August 16, 1958 The Place: The North Beach area of San Francisco Patty Farb: Department store heiress with too much money and too much time on her hands. She often gave money to struggling artists she felt showed promise. Patty had affairs with most of the performers at the club and once fell especially hard for Swain. She also gave her money to many causes and was once, for a short time, a member of the American Communist Party. She attended a party for Swain that evening and claimed she was with one of her artist friends at the time of his death. Art Fez: The bongo playing comedian who opened the show for Swain and doubled as the M.C.. Fez was active in the labor movement in the late 1940's and at that time a good friend of Swain. Fez was called before the House Un-American Activities Committee (HUAC) While he was cleared of any "wrong-doing", he was black-listed from the clubs and was playing his first gig in four years. He did attend Swain's party but left early. He stated that he was searching the streets for a restaurant that served purple gelatin at the time of Swain's death. Barney Fawn: Forty year-old club owner and amateur UFO watcher. Fawn claimed to have had encounters with alien beings and believes some of the acts he hires are the next closest things. He would loan struggling artists moderate sums of money and then have them pay him back by playing his club for peanuts. He did not attend the party, choosing to remain downstairs counting the night's receipts instead. Teresa Wilcox: Was Swain's live-in but was not sharing the apartment during Jeremy's current engagement. They had been having "marital" problems of late. Wilcox also served as Swain's back-up singer but did not perform at the Gate of Fate. She attended the party but was unclear of her whereabouts at the time of his death. Rocky Tuttle: Young and aggressive loan officer of a small bank. Tuttle was making the scene often in the past few months. Although he was as square as they come, Tuttle and Swain struck up a close friendship. He did not attend the party and was vague about his movements around the time of the crime. Del Finney: Swain's business manager and owner of a dry cleaning store. He was a big force behind Swain's success and was a hard working as any manager of a folk act could be. Finney was not at the party. He left right after the show to make final preparations for Swain's next date. Natalie Corvus: She was a chronic club hanger-on who fancied herself a talented singer. She would invariably come on stage every amateur night and belt Gregorian chants at the top of her lungs. Natalie was often seen outside the club in Swain's company and it was well known that Teresa found that fact unbearable. Natalie was at the party but left after a boisterous argument with Wilcox about the former's singing or lack of singing talents. She claims she was star gazing at the time of death. Fran Fern: Fran was the manager/bartender at the Gate of Fate. She was briefly married to Swain during the lean years. Active in many causes, she once lobbied to have the raisin declared the national fruit. She stayed in the club to clean-up and did not attend the party. Game Includes: Full Plot Scenario Character Biographies Recorded Introduction 24 Clues Solution