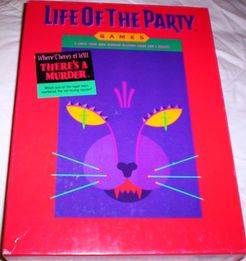 想玩 拥有
Life of the Party: Where There's a Will, There's a Murder

Milton Bradley produced 8 mystery party/role playing games (in the vein of How to Host a Murder) in 1987. They were all called "Life of the Party" games, four mysteries and four murders. The back of all boxes indicates that these are also copyright Jamie Swise Games, as that outfit produced several of their own titles (and several, if not all, of these) a few years earlier. Copyright date below is based on the Jamie Swise date on the invitations. Episode: Where There's a Will, There's a Murder (1985) It is Monday, September 23, 1985. We are at Windgate Manor on the shores of Lake Geneva, Wisconsin. This morning 83-year-old Phineas T. Windgate was found dead in his bed with a silver-handled letter opener stabbed through his heart. Windgate was the multi-millionaire owner of Northland Breweries and the Wisconsin Weevils pro football team. The only people in the house at the time of death were the eight major heirs to his fortune, and, of course, his 60 beloved cats.