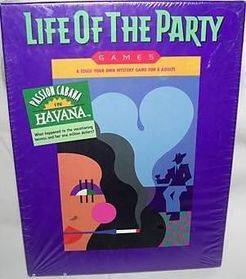 想玩 拥有
Life of the Party: Passion Cabana in Havana

Milton Bradley produced 8 mystery party/role-playing games (in the vein of “How to Host a Murder”) beginning in 1985. They were published as "Life of the Party" games; four mysteries and four murders. These are also copyright Jamie Swise Games—the designer of the games, who produced several other titles (and many, if not all, of these) a few years earlier. Episode: Passion Cabana in Havana Katherine Hobley, a pillar of Philadelphia society, was spending a carefree vacation in Havana, Cuba, in the spring of 1943. It seems she became involved with some interesting characters who frequented a run-down bar in Havana called the Passion Cabana. Upon her return to Philadelphia, she promptly withdrew $1 million from her bank account. She was accompanied by a rather disheveled young man, possibly of Cuban descent. Her anxious family has not seen or heard from her since. The Time: May 8, 1943. The Place: The Passion Cabana in Havana Max Hammond: A 35-year-old man who came to Havana in 1940. He is the owner of the Passion Cabana and has a black belt in karate. The funds he used to purchase the club supposedly came from the proceeds earned form twelve years of bounty hunting in the States. While rumors link Hammond romantically with every woman who ever crosses his path, he actually lives alone with a parrot and a motorcycle which hasn't run in two years. Harlan Standard: An expatriated American author of some of the most controversial fiction of the '30's. Standard came to Havana to escape the constraints placed on him by his sexual and political leanings. A New York book reviewer slammed his latest book by saying, "Who wants to read drivel penned by a man whose heart lies in Stalin's boudoir?" Standard lives at his Aunt Edith's compound under her iron-fisted rule. Mama Lisa: The gregarious madam of the largest house of ill repute in Havana. On the streets, Mama Lisa is known as an angel of mercy to her girls and the island's most vengeful practitioner of voodoo to her enemies. General Luis Beltro: The brutal leader of Havana's provincial militia who refers to himself as Luis the Eraser. He has gone on a one-man crusade of late, driving most gambling and prostitution operations out of Havana. Beltro is catching heat from his superiors. They feel he should spend more time dealing with the growing bands of communist rebels which ring the outskirts of Havana. Maria Solez: Smoldering, black-eyed beauty who is Max's closest advisor and night bartender at the Passion Cabana. Maria is rumored to be the only person on the island "woman enough" to tame Max Hammond's amorous urges. Edith Pitvay: The youngish dowager of Cecil Pitvay, the late sugar cane magnate. Edith owns a large compound on the beach which has been a refuge for struggling artists and site of some of Havana's more decadent parties. Rumors of a "chamber of horrors" on the compound have never been substantiated, however. Marylin Desmond: A seemingly permanent fixture at the Cabana. Marylin is renowned for her ability to consume enormous amounts of rum. Despite the amount of time she spends at the place, this well-dressed and well-spoken woman has managed to keep almost everything about herself a secret. Reggie Van Peller: The fiancé in search of his beloved Katherine. A product of all the best schools, Van Peller was exempted from military service because of a large monetary donation to a member of the local draft board. Devastated by Katherine's disappearance, Reggie let his membership to the Hubris Polo Club expire. Game Includes: Full Plot Scenario Character Biographies Recorded Introduction Clues Solution