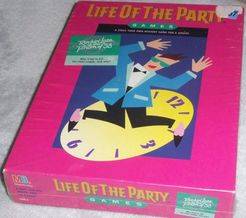 Milton Bradley produced 8 mystery party/role playing games (in the vein of How to Host a Murder) in 1987. They were all called "Life of the Party" games, four mysteries and four murders. The back of all boxes indicates that these are also copyright Jamie Swise Games, as that outfit produced several of their own titles (and several, if not all, of these) a few years earlier. Copyright date below is based on the Jamie Swise date on the invitations. Episode: Rockin Late at the Prom of '58 (1987) Shortly before the presentation of the queen and her court at the St. Vytuperus Catholic Girls Academy (known as the "Toop") prom, someone fired a zip gun in the direction of a dancing couple. The suspects are being gathered in the gym in hopes of finding the culprit without calling adverse attention to the school. The Place: Hamtramch, Michigan, a town literally surrounded by Detroit and the site of a huge Dodge plant. The Time: May 5, 1958