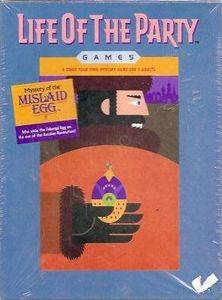 想玩 拥有
Life of the Party: Mystery of the Mislaid Egg

This is one of the Jamie Swise murder-mystery role-playing games published by Just Games. It was later published by Milton Bradley as part of their "Life of the Pary" line in 1987. Episode: Mystery of the Mislaid Egg Faberge: The Man and the Egg Peter Carl Faberge was born in 1846 and died in 1920. The Russian achieved fame by designing dazzling fantasies in gold and silver, set with precious stones and further decorated with brilliant enamel work. After winning a medal at the Pan-Russian Exhibition in 1882, his work attracted the attention of the Tsar. This ultimately led to the creation of the series of Imperial Easter Eggs. Faberge's eggs were first commissioned in 1886 by Tsar Alexander III, for his wife, Maria Feodorovna. The tradition continued with Tsar Nicholas II and his wife, Alexandra. The Plot: Imperial Russia is about to collapse. Members of the Pahlov family, cousins of the Tsar, are clinging to the tattered shreds of Imperial privilege. Shortly after the Peasant Circus celebration, the family's prized Imperial Faberge Easter Egg was discovered missing. The family regards the egg as a symbol of legitimacy and social status. The Time: March 1917 The Place: Petrograd, Russia The Cast: Vladimir Pahlov: Head of the House of Pahlov and disgraced military leader. Vladimir led 300,000 men during the Battle of East Prussia in 1915, but couldn't find a fourth for a game of bridge when it was over. He currently courts peasant girls and designs Petrograd's defense for the impending Red invasion. Natasha Pahlov: Wildly eccentric grand dame of the House of Pahlov, wife of Vladimir, and possessor of the largest shoe collection in Mother Russia. Natasha believes that the shoes vie for social position and partake in scandalous gossip. As a result, the footwear is constantly monitored and rearranged in the Imperial Shoe Chamber. Lord Peter Welthrop: Natasha's half-brother and second cousin. Welthrop has lived in the House of Pahlov for the past six months. A native of London, he fled to Russia after running his father's bank into the ground. Destitute and confused, Peter spends most of his time in the Imperial Sable Yard, poking the animals with sticks and watching them bare their teeth. Ludwina Pahlov: Beautiful and manipulative daughter of Vladimir and Natasha. Ludwina has persuaded the family to adhere to the practice of Khlysty (Flagellants). Flagellants believe that a person must sin and repent before he or she can become closer to God. This belief inspired the Pahlov family tradition of the Peasant Circus. This bimonthly event calls for the humiliation of invited peasant "guests". Grigory Yamovich: Disheveled yet hypnotic mystic. Invited home by the adoring Ludwina, Grigory became the guest who wouldn't go away. Besides indoctrinating Ludwina with the nuances of Khlysty, he ensured his "usefulness" within the House of Pahlov by seemingly curing sickly sables through hypnotism. Zudnyet the Dung Hauler: Preferred peasant of Natasha. Zudnyet is keeper of the Imperial Compost Pile and overseer of the Imperial Beet Patch. He invariably sits beside Natasha during the Peasant Circus celebrations, clad in sable furs. Zudnyet is often summoned to Natasha's chambers for late-night discourses concerning man and God. Olga Grimach: Lady-in waiting to Natasha and a woman of true inner strength. Most of Olga's time is spent as shoe organizer for Natasha's sometimes "animated" footwear collection. When not soothing soles, Olga writes eternally senseless poetry for a lover no one has ever seen. Tatiana Mikhapolov: Sister of Vladimir and chief rival of Grigory. Tatiana is constantly trying to drive Grigory from the House of Pahlov in hopes of curbing the family's slide into a moral abyss. She poisoned his tea, dropped glowing embers in his shorts, and pushed him out a third story window-all to no avail. Grigory loves the attention. Game Includes: Full Plot Scenario Character Biographies Recorded Introduction 24 Clues Solution