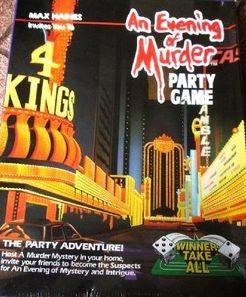 One in the series of "Max Haines Invites You To An Evening of Murder (tm)" party games. Plays like the popular "How to Host a Murder" series. This particular edition is "Winner Take All." From the box... Crime Scene: It happened in Wizards Casino in Las Vegas. The Bank manager, Chuck Mavery, was partaking in his favorite obsession...gambling...and having the biggest winning streak of his life. The crowd gathered around the craps table where he was playing, to watch the excitement. Suddenly, a scuffle broke out. Chuck grabbed his neck and fell to the floor. He had a small puncture and blood on the side of his neck. He was paralysed and could not talk. Within minutes, Chuck had succumb to the deadly effects of the rare poison, curare. His luck had run out. The suspects: Clara "Granny" Smith: Retired, she's just won a million in a lottery. About to hit the casino, she's out to make up for lost time. Joey Zinger: A zany stand up comic. Will his sense of humour "knock-'em-dead"? Katie Morgan: A chorus line dancer and Casino dealer. Has she played out her last hand? Nick Lucopoulos "Lucky Nick": A handsome Greek billionaire and professional gambler. Will he risk it all for revenge? Cookie Daniels: Lucky Nick's vivacious blond fiancee. Is Cookie's world about to crumble? Tony Bonello: A no-nonsense casino manager that runs the operation his way...you can bet on it! Brigitte Damien: The owner of an exclusive escort service. She as something for everyone's taste...and knows all their secrets! Dr. Julius Prescott: A world-renowned plastic surgeon...how far would he go to save face?