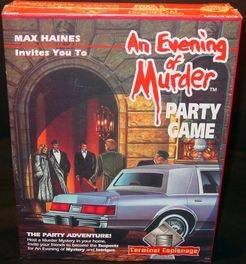 One in the series of "Max Haines Invites You To An Evening of Murder (tm)" party games. Plays like the popular "How to Host a Murder" series. This particular edition is "Terminal Espionage." From the box... Crime Scene: In a luxurious secluded hotel in the heart of Nocktavia, a murder takes place. Joseph Lawrence was well known for hosting his own lavish birthday parties. Though security was tight, eight disguised secret agents managed to gain entry to this gala event. The ballroom that night was enchanting, the music was playing softly...when suddenly..., a blood curdling scream was heard. Guests rushed out to find Joseph lying on the balcony. He had been strangled... The Suspects are: Natasha Kozlov: A secret agent posing as a singer. Was murder her ultimate encore? Fritz Vaughn Heusen: A bartender with a "secret" recipe...did he add murder to his ingredients? Alexandria Winfield: A highly erotic woman of the evening. Could she be sleeping with the enemy? Ivan Tolstoy: A security guard...with a license to kil. Jenna Curran: A French maid with all the trimmings. What was she serving the night of the murder? Angelo Decca: A gigolo with an exquisite taste in women. Undercover work was definitely his specialty. Jessica Collins: The grieving fiancee living a double life. What dark secrets lie beneath those tears? Simon Rickman: A computer whiz, who was about to crash..did he byte off more than he could chew?