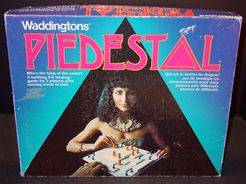 From the instruction sheet: PIEDESTAL is a three-dimensional strategy game for two players, and is played on a somewhat pyramid-shaped playing board. The Pawns start at the bottom-most spaces on the board and try to move up to the large, central top-most space: THE PIEDESTAL. Meanwhile, the Knights guard the PIEDESTAL and try to remove the Pawns from the game before they can reach the PIEDESTAL. The Pawns win the game if five of them reach the PIEDESTAL, otherwise the Knights win. SETUP: The twelve Pawns are placed three to a corner on the three lowest level spaces in each corner. The eight Knights are placed next to the PIEDESTAL, on all eight of the second-highest spaces on the board. MOVE: A Pawn can move to a space on the next higher level directly beside it. Or it can move any number of spaces around the same level, unless blocked by another Pawn or Knight. The Knights can move the same way, with the additional advantage of moving either to a lower or higher level. CAPTURING: During his turn, if a player is able to capture an opponent's piece, he must do so instead of making an ordinary move. To make a capture, the player moves his piece onto his opponent's space, and removes the opponent's piece from the board. A Pawn is able to capture a knight only if the Knight is one level higher than the Pawn, and directly beside the Pawn. A Knight is able to capture a Pawn only if the two pieces are on the same level, and directly beside one another. A player can never make more than one capture in his turn.