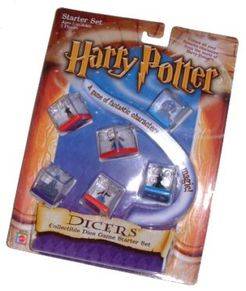 From the Warner Bros. website: "Dicers is a collectible dice game with two levels of play. Knock your opponents dice out of play in the basic game, or develop unique combinations to expel dicers to the dungeon in the advanced game. For ages 5 years and over." The dicers game is played with collectible dice. These have 5 clear sides, with a figure representing the character inside of the dice. The sixth side is solid, and shows the name of the die, its "casting number", its special ability, and its affiliations. The clear sides are numbered from 1 to 5, while the solid face is the '6'. Each die represents a character or item from the Harry Potter stories. The starter set includes 6 dice; Harry Potter, Hermione Granger, Draco Malfoy, Severus Snape, Hagrid, and the Sorting Hat. It also includes a sheet of rules. The rules actually have 3 levels of play described in them. The basic game only uses the casting numbers on the dice. The Intermediate game adds in the abilities of the dice, and different areas of play, and the advanced game adds in the affiliations of the dice, and reserve abilities. In the basic game, players set out the six dice and each take turns picking one to determine which dice they will use. Players then roll to see who goes first (the "Challenger"). The challenger picks one die, and then the defender picks on of their dice. The challenger may roll the die a number of times up to its Casting number, looking for as high a roll as possible. Only the last roll made counts, even if it is lower than a previous roll. The defender does the same with his or her die. The lower roll is expelled (removed from play) and the winner becomes the new challenger. This is repeated until only one player has dice left. In the Intermediate game, there are three areas of play. All dice begin in the Field. A losing die is placed in the dungeon, where it cannot be used. A winning die is placed in the Keep. Dice in the keep cannot be used until a player has no dice left in the field, at which point all of the dice in that player's Keep are moved into the Field. The winning die can choose to either expel the losing die to the dungeon, or to just place it in the Keep and activate the special ability of the winning die. One side of the rules lists the different special abilities. A few examples include: Capture, which lets you take the enemy die and use its special powers as well as your own. Summon, which lets you retrieve a die that has been placed in the dungeon. Swap, which lets you trade the locations of two of a player's dice. The game ends when one player's dice are all in the dungeon or captured. In the Advanced game, you can use the affiliations on the dice. The affiliations include the four houses, creatures, and wizards. For every die with the same affiliation as your chosen die in your Field, your die gains +1 to its casting number. This level of the game also adds reserve abilities. These are special powers that, when activated, have no immediate effect but allow the die to be set aside in 'Reserve' and activated later. Extra dice are sold as single dice. The die you are buying is clearly displayed on the outside of the packaging. The packaging stated that there were "54 characters to collect" but only 36 were released. There were two 'Starter Packs' with 6 dice each and 24 individual dicers.