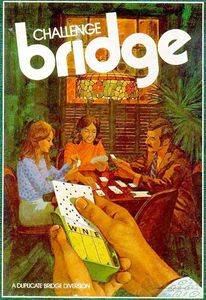 Part of the 3M Bookshelf Series. Using a special deck of cards and a punch card overlay, this games allows 4 people to play what amounts to tournament Bridge. There are 100 predetermined deals taken from American Contact Bridge League tournaments. Each partnership does not score raw points as in rubber bridge, but rather points in comparison to how other partnerships did playing those same hands in tournaments. The game also contains a book that has analysis of each of the 100 hands by noted bridge expert Oswald Jacoby. An additional set of 100 hands was released for this game.