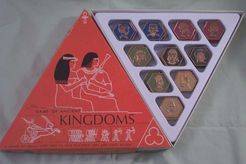 The components for this game consist of 18 plastic hex tiles in each of 5 colors - each player gets 16 blank tiles, one King, and one Warrior. In the initial phase of the game, players place these tiles on the table (there is no board) in one connected group, but are not allowed to connect more than 5 of their color together. Once all tiles are placed, a turn generally consists of exchanging the positions of any two tiles. The object is to unify all of one's own tiles into the same country (connected group). The King protects the tiles in its group (another player can only remove one by swapping it with his or her own King), but can only be moved once for free - after that a penalty must be paid. The Warrior offers additional movement abilities. The game was originally published in 1975 under the name Kingdoms. The version shown, titled The Game of Ancient Kingdoms, was published in 1976. The rules are nearly identical, with the later version adding the penalty rule for moving the King and a rule for scoring draw games.