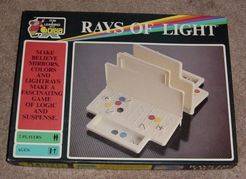 In Rays of Light, each player sets up colored chips and chips representing mirrors on their grid, which is hidden from their opponent, much like in Battleship. The object is to guess what your opponent's grid looks like, by shooting imaginary light rays into the grid. Your opponent will tell you where on the grid the light exited, and what color it was. Using this information, you try to recreate your opponent's grid before he does the same. Rays of Light could be described as a combination of Battleship and Black Box.