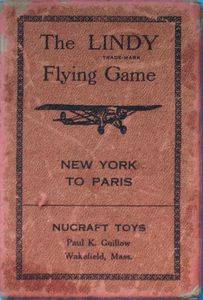 Card game similar to Touring was published in a form fitting box with 75 cards: 39 mileage, 10 take off, 10 weather, 15 hazards and 1 Lucky Lindy. Based on the historic flight of the same year, hazards include forced landing, storm, fog, engine trouble, etc. Inventor was a flier in the US Navy and also made gliders and models. Came out in the same year as the similar game Lindy, the New Flying Game by Parker Bros., apparently the subject of a lawsuit by Nucraft against Parker Bros which the latter won. This caused the Nucraft game to have a far more limited production and thus their game is far more valuable to collectors today. Not so sure about this interpretation. A note on the rules for Nucraft's game Crash game indicate that Parker Brothers bought the rights to the Lindy game from Nucraft. So it would seem that Parker bought out Nucraft and shelved their version of the game. After the lawsuit Nucraft issued a different game called Crash, The New Airplane Game. It seems to be a Parcheesi type game played with three planes per color and a four color spinner. Nucraft Toys ended in 1933 when the company started operating under the name of its founder Paul K. Guillow. The company Paul K. Guillow did not produce any games.