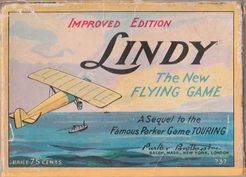 Created to commemorate the famous 1927 first solo flight over the Atlantic. Similar to Touring, there were 99 cards, 51 of them mileage and 48 of the move and event type. Headwinds kept you from playing the 500 mile cards. Beside obvious disasters like running out of fuel, you had to deal with ripped fabric and broken propellers. There were no equivalents to things like puncture proof tires and extra gas. Box cover shows a plane flying across the ocean. A similar game called The Lindy Flying Game by Nucraft Toys came out in the same year and was apparently the subject of a lawsuit by Nucraft against Parker Bros which the latter won. This caused the Nucraft game to have a far more limited production — the company ended in 1928 after having changed the game to CRASH, THE NEW AIRPLANE GAME — and thus their game is far more valuable to collectors today.