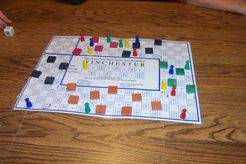 Winchester is a race game where the players score points by getting their pawns around a rectangular track the fastest. Each player gets 3 to 5 pawns (based on the number of players) which are placed on a 4 by 4 starting grid. The track is four squares wide. During the setup, the players randomly cover some of these squares with wooden blocks to provide obstacles that prevent movement. The location of the blocks is determined by several die rolls. This random setup provides for a different track each race. Movement of the players' pawns is controlled by a special six sided chess die. The die contains the six basic chess pieces: King, Queen, Rook, Bishop, Knight and Pawn. Each turn a player will roll the chess die to determine everyone's move for that turn. Once all players have moved, the next player on the left rolls the die for the next round. When moving, the player must move one of his pieces based on the indicated chess piece. Like chess, the player may not move off the edge of the board or over one of the obstacles, except for the knight move. If the player captures one of the piece of another player, the two pieces exchange positions. The first piece to cross the finish line scores 15 points with each successive piece scoring one less (14, 13, 12, etc). There are small bonuses for certain finishing conditions (first to have all pieces finish, three positions in a row, etc). The game comes with a rolled up, laminated board, 25 pawns, 24 wooden blocks for obstacles, one normal die and one chess die.