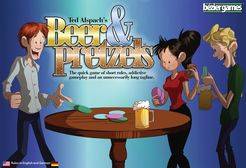 In Beer &amp; Pretzels, players throw coasters onto a table. And then they get money. And then they throw more coasters. And then they get more money. This very complex and detailed process repeats until the end of the game at which point the player with the most money wins, just like in real life. At that point the winner will claim that Beer &amp; Pretzels is the best game ever, and the losers will claim that the game is fundamentally flawed, and most likely broken. Just by coincidence, each coaster has an image of either pretzels or beer on it. Different pretzels have different values. Beer doubles your money. Players only score for items that are completely visible... items entirely or partially obscured by other coasters don’t count. There tends to be name calling, bragging, self-high-fiving and the occasional brawl during the game, all of which add to the rich atmosphere and theme. WARNING: Beer &amp; Pretzels should be played with caution. Unmitigated use of this game could result in anxiety, agitation, panic attacks, lapsing into inconsistent foreign accents, irritability, hostility, aggressiveness, double vision, drooling, impulsivity, restlessness, extreme hyperactivity, unusual changes in behavior, kidney problems, long term memory loss, narrow angle glaucoma, itching, right upper belly pain, insomnia, fever, an inability to line up buttons properly on dress shirts, dark urine, yellow skin/eyes, unexplained flu-like symptoms, anal leakage, dizziness, yodeling, hive clusters, nausea, fainting upon standing, stiff muscles, uncontrollable cravings for onion rings, confusion, severe liver problems, barking, high fever, increased frequency of toe stubbing, dry mouth, constipation, sudden uncontrollable left-handedness and decreased appetite. This is not a complete list of potential side effects. Ask your doctor if Beer &amp; Pretzels is right for you.