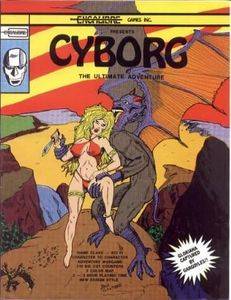 Two-player wargame with both SF and fantasy elements ("After the atomic wars, magic filled the land..."). One player controls Princess Gloriana and her entourage, who are trying to get from the NE corner of the map to the Holy City in the SW, where Gloriana's coronation will take place. Gloriana is escorted by cyborgs, Amazons, and Imperial Guardsmen, and is watched over from afar by the magic-using Guardians in the Holy City. The other player controls Aemulatio, the sister of the dead king, who is trying to capture and sacrifice Gloriana in order to seize the throne herself. Aemulatio fields mutants, gargoyles, and a pair of Necromancers (amusingly named Kcud and Nootrac) against Gloriana's forces. Playing time is listed as "2 - 3 hour(s)" on the cover, but the rules declare there is no time limit. For Gloriana to win, she must reach the Holy City or totally rout Aemulatio's minions; for Aemulatio to win, her forces need only capture Gloriana (even if Aemulatio and her Necromancers are all dead, which would be a very Pyrrhic victory). A six-sided die (not included) is required to resolve combat, and also to allow the Necromancers to cast one spell with random effects once per turn, and the Guardians to cast one spell each of "Mind and Magic" per turn. The lurid cover art by R. P. "Dick" Winther, seems intent on evoking both Silver Age comics and 1940s pulp magazine covers, but falls far short of Excalibre's self-proclaimed "Beautiful graphics and detail." A gargoyle is seizing a terrified Gloriana by the thigh, and appears to be wrestling her atop a rock... but closer inspection of the lower left corner of the cover reveals a second, smaller gargoyle in flight, and the space between it and Gloriana is filled with ant-sized fighting men. Presumably the main figures are meant to be aloft, though you'd never know it to look at them, making this cover one of the worst examples of the classically bad game art of the 1970s.