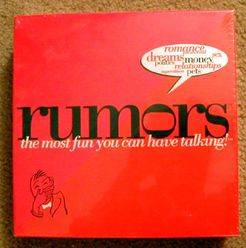 Rumors is an adult conversation game for three or more players. (though it can be played with two, via special rules) The object of the game is to spread light-hearted rumors that lead to explanations about the life experiences and beliefs of the players. Players take turns spreading rumors about the other players. In response to each rumor, players must use knowledge, judgment, and intuition to guess whether there is any "truth" to the rumor. Points are scored based on the players' abilities to guess correctly--and their willingness to select HOT rumors and elaborate on their responses. The first player (or team) to score 40 points wins.