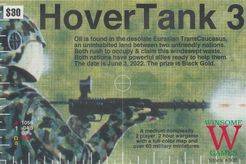 This near-future two-player wargame with very minor SF elements has an American company discovering oil on the frontier between two small unfriendly nations in the Caucasus (portrayed on a color-coded hex map). On June 3, 2022, the two nations go to war over the oil, fielding modest armies (tan and brown plastic miniatures) that include assault hovercraft and hovertanks. The larger, faster armies of their stronger allies (gray and green miniatures) soon become involved. There are three ways to win: an oil victory (one player occupies all three wellheads at the end of a round), a political victory (one player occupies two of his opponent's six urban areas at the end of any movement segment), or a military victory (one color is completely eliminated at the end of any combat phase). As its name indicates, this is the third installment in Winsome's HoverTank series.