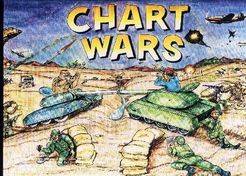 "It is dawn. Enemy forces can be heard assembling over the ridge to the south. Your commander has ordered you to hold your position at all cost. You feel that if you can only knock out the enemy armor before it spots your positions, you will stand a chance of surviving to see evening chow. ..." Sounds pretty wargamish, doesn't it, but don't let this fool you. This game attempts to add some humor to the wargame genre. For example, the "How to Play" section has this to say about the game's VP (Victory Point) track: "If you find the VP track too confusing you may keep track of your VP on a piece of scratch paper. Players who have already figured this out on their own gain 1 extra VP." And there's this in the "Errata" section: "Illustration #12 is not an M4A3E8 Sherman. It appears to be a large dog." In spite of these and numerous other examples of humor the game itself is an OK effort. It actually is fun to play. (The playing time is a guess.) Bloomsburg, PA-based DIPCo first released this in the same box with the game "Space Waste" as a signed and numbered limited edition "DIPCo Double."